Find an event near you

Engineer Alan Nieto, also an ELECTRATON's honorary judge for the championship's tech revision, gave us a briefing on Mexico's EV charging infrastructure. Given his vast experience in the matter, he was able to provide specific data and expectations on the years to come to the in-person and online students.
New members fo ELECTURM Racing Team, were presented as well as it's new captain, Jessica Mendez, who has been just appointed to steer the team's faith on the 2022 series edition, since they're the defending champions given the last two years tha races were put to hold due to pandemic measures. It's important to mention that this DEED'22 event was last minute converted from an in-person event to an online precisely to avoid risk of infection in the original facility, and the institution Tecnológico de Monterrey-Querétaro were kind enough to provide a spot in campus where we could broadcast a live zoom session to have our long time waited event along to almost 200 cities in north América. We, at Queretaro City.  were proud to host the only Mexico's DEED event and hopefully another cities will follow.
So finally we were able to celebrate Earth's Day 2022 by promoting eRacing and knowing a llitle more on EV charging stations in México. Thank You Porsche Centre Queretaro  for being responsible enough and to take care of our growing community; thank you ITESM-Qro; thank You Electrum Racing Team; thank You Engineer Alan Nieto and to the people that keeps showing intrest and following ELECTRATON's activity prior the launch of the 2022 Championship "Back To Track".

More photos from this event. 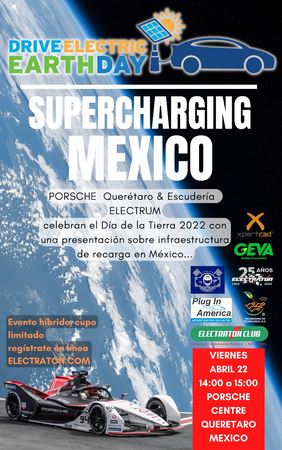 SPANISH SPOKEN EVENT We will have an in-person and online webinar about superchargers infrastructure in Mexico having a live demonstration of one of the few and firsts ultra chargers installed in the country. Limited registration of up to 50 people in person attendance and unlimited via online.
College students will attend and present themselves as wells as the upcoming championship is about to start: ELECTRATON MEXICO 2022

There are currently 50 attendees registered.